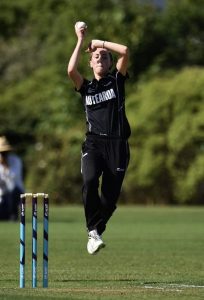 First Year Academy Athlete Harriett Cuttance is one of our multi sport athletes, having an outstanding season in both netball and cricket. Some of her best achievements within her 2019/2020 netball season have been getting selected to attend the Netball New Zealand Development Camp in Auckland earlier this year, and being named vice captain of the U17A Dunedin netball team who placed 4th at nationals last July. Harriett has also had a successful season with her Columba senior A netball team. the team won the Otago Secondary school tournament.

Harriett has also had a very successful 2019/2020 cricket season. Harriett was selected for the New Zealand Maori Secondary Schools girls team, Harriet was also a member of the Otago U19 women’s team that attended Nationals. Harriet has also had a successful season with her school team with being named captain of the First XI, who are set to play in the Otago final later this year.

Quote from Harriet ” The OAS programme has taught me a lot about myself as an athlete, both physically and mentally. I have learnt so many skills that I will put to use in my upcoming seasons. the skills and information we have learnt so far have made me a better athlete, and I hope that I can keep applying them to my sport moving forward to achieve my goals”.